While I was practicing my waves prints with my gel plate to fix my mistake in my bible I decided to use the practice ones on a card. I decided to combine it with this week's SCS Mix-ability challenge which is to confine your "art" to 3"x3" square. To be mixed media you need several mediums. I used acrylic paint, colored pencils and a white gel pen.  I put little scraps of blue cardstock around the edges. I also did some doodling on the frame with the white gel pen. I hand wrote the sentiment. 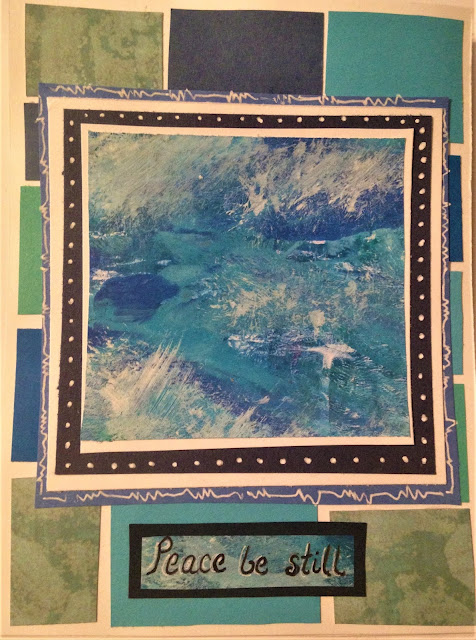 As I was making this card I was reminded that there are storms in life that I have no control over. I have to relinquish that control and let the one who controls the winds and the waves be in charge. I was reminded of this hymn Peace be still (Master the Tempest is Raging)  It was written in 1874 by Mary Ann Baker.
This is from Hymnary.org

1. Master, the tempest is raging, Peace, was written in 1874 at the request of Dr. H. R. Palmer, who desired of her several songs on the subjects of a series of Sunday School Lessons for that year. Its theme is "Christ stilling the tempest."   During the same year it was set to music by Dr. Palmer, and pub. in his Songs of Love for the Bible School, 1874. It is found in other collections, including I. D. Sankey's Sacred Songs and Solos, London, 1881. Its home popularity was increased by its republication and frequent use during the illness of Pres. Garfield. It was sung at several of the funeral services held in his honour throughout the States.

This was my favorite hymn growing up. When it was request time, this was always one of the ones I picked.