We remember... thank you.

Memorial Day Weekend... it is more than a 3 day weekend to party, barbecue or travel. It is a day to remember. To remember those who gave all. There are only 18 National Cemeteries in the United States of America. One of them is in our town, Each year the boy scouts help place flags on the graves. Today I went with my son and two other boys from our troop. My son is the tall one on the right. This is our ninth consecutive year to do this. He was in 1st grade that first year. I would say we are almost flag placing experts by now. 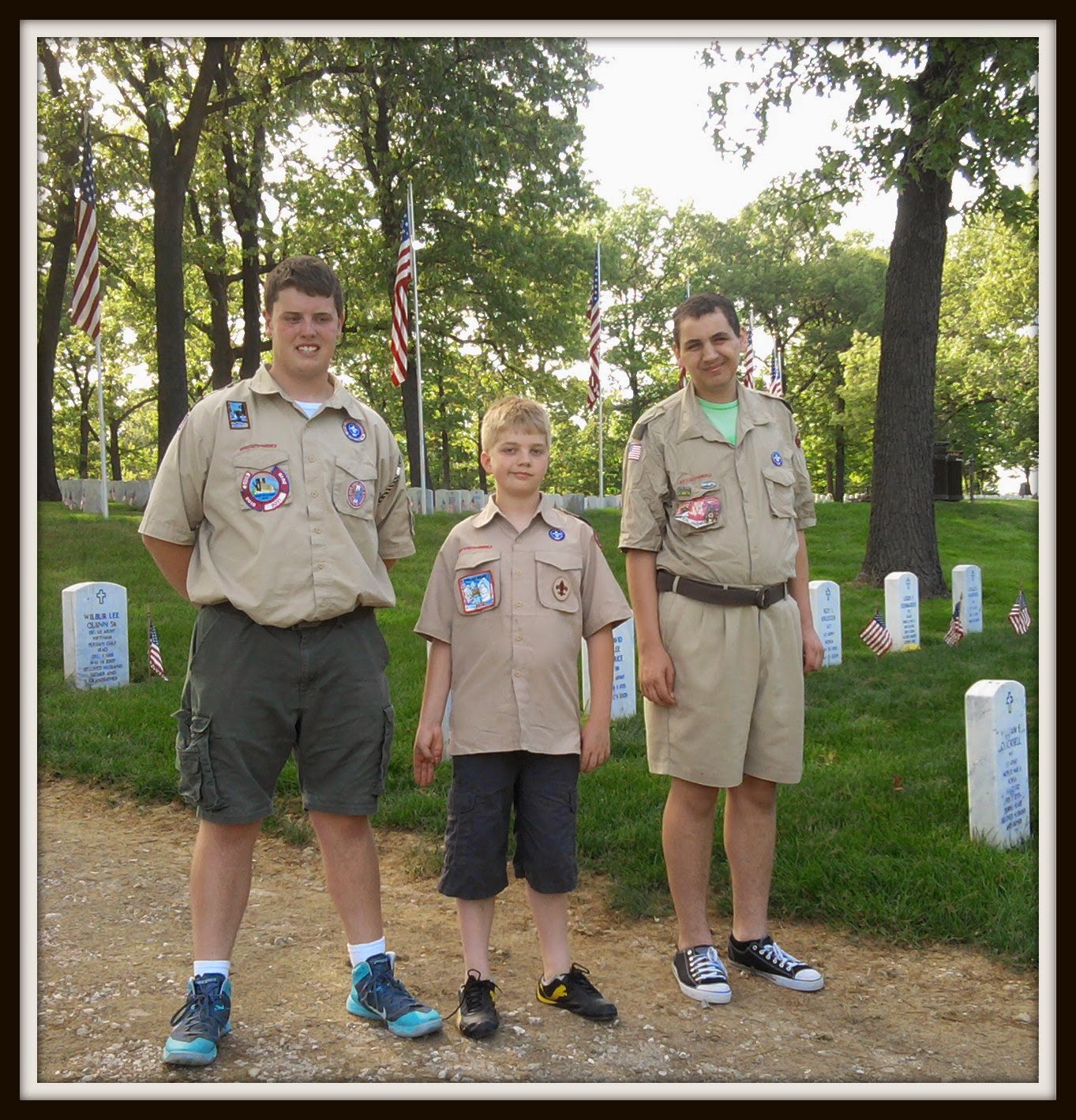 The Free for All challenge (F4A222) today was to make a project with a flag on it. I made a stylized flag with red and blue cardstock and texture paste. This flag card is also for the  Mountain Plains Crafters blog.
Posted by MariLynn at 10:31 PM 3 comments:

Today the SCS Mix69 challenge was to make faux tile. I used microsoft excel to print a stencil for my tile. I printed it and cut the "tiles" out using an exacto knife. I then covered up the holes with drywall tape. I then sponged with purple and blue ink. I took a second stencil and added silver inka gold metallic ink for the grout. I outlined the grout with a black sharpie marker. I drew x-s in the intersections. I added rhinestones over the x-s. I added quilled roses and a keyboard.

This sweet little dancer is a digital image from Diane's Daydream Designs. It is from a set called MY HEART STILL DANCES 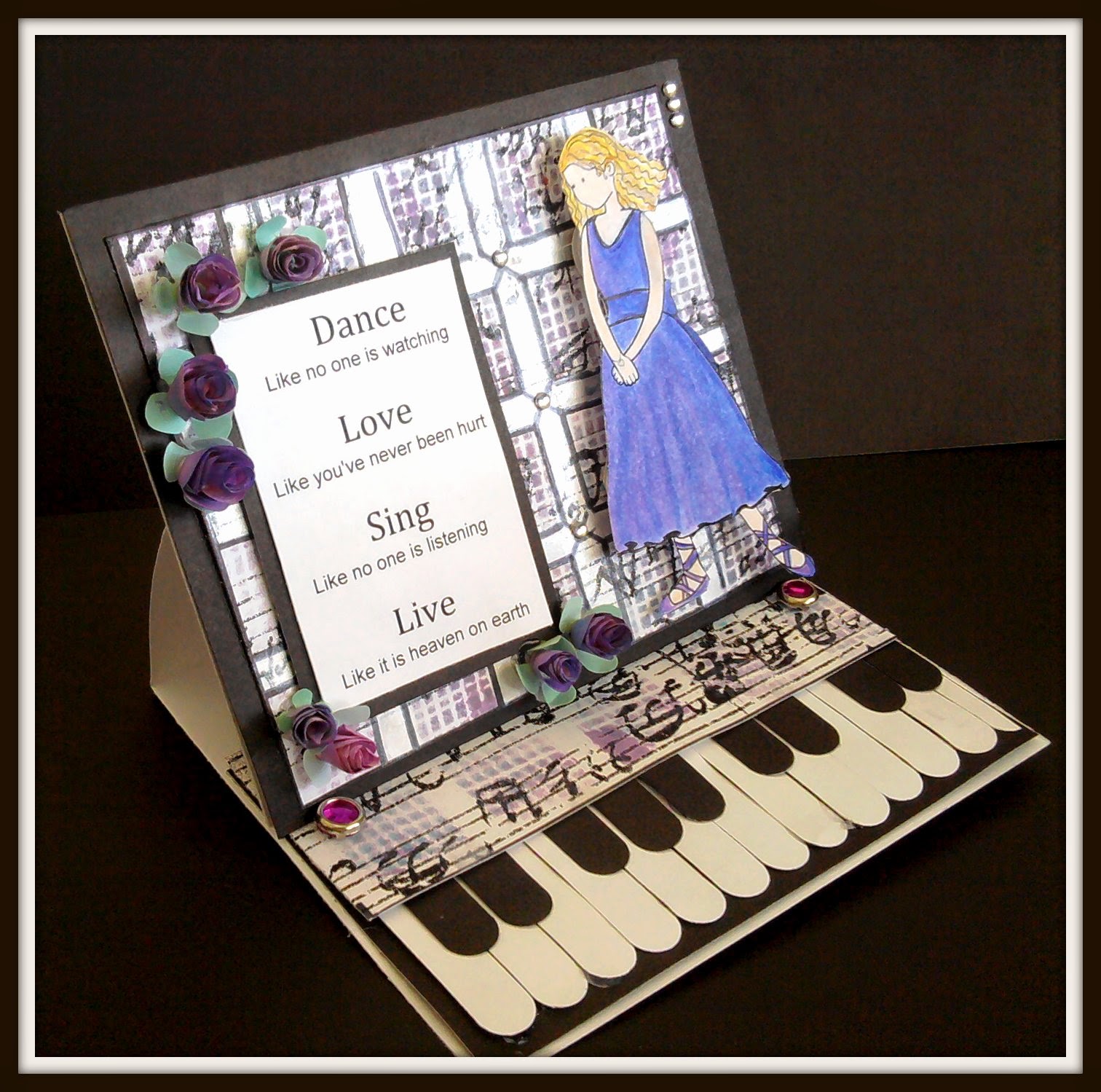 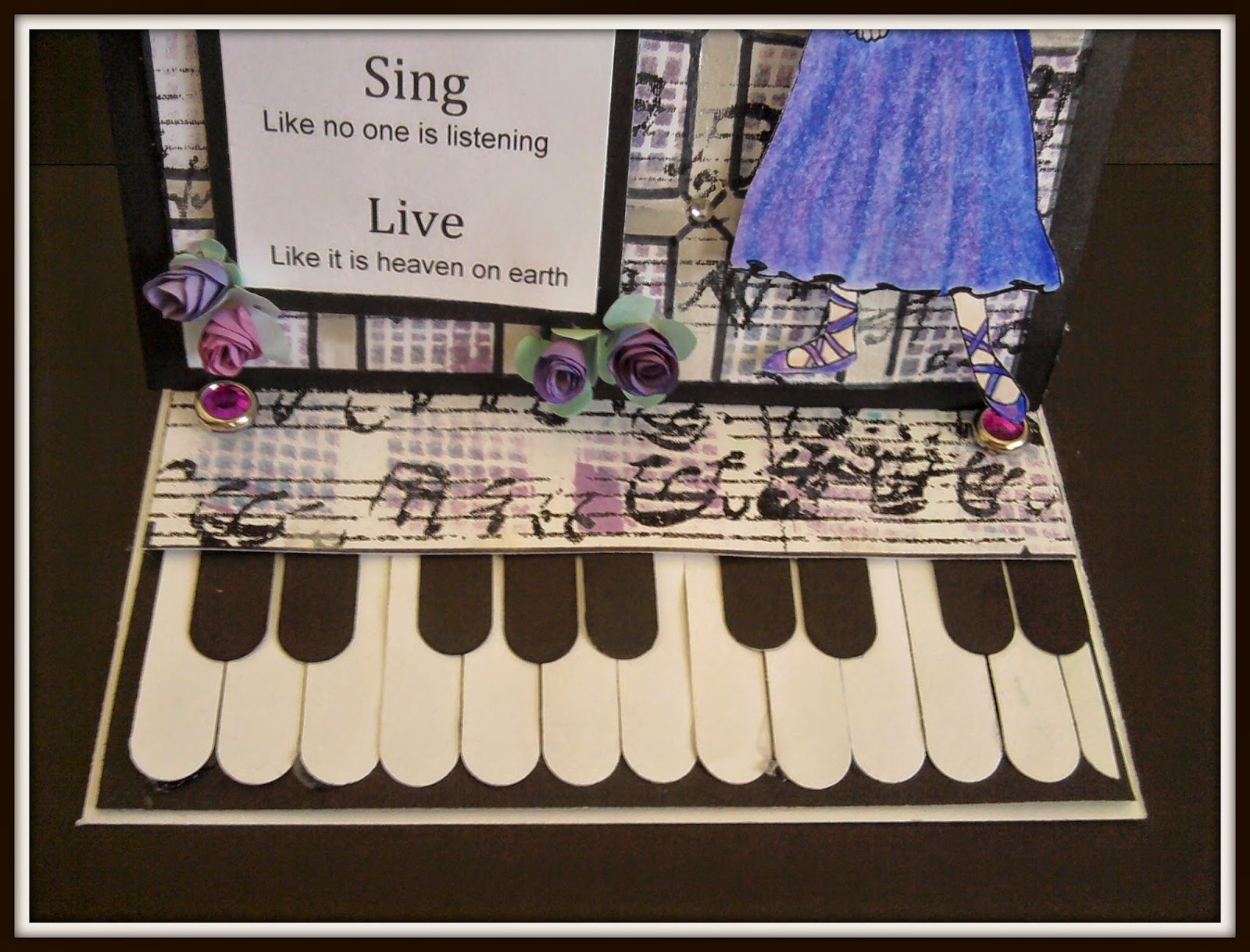 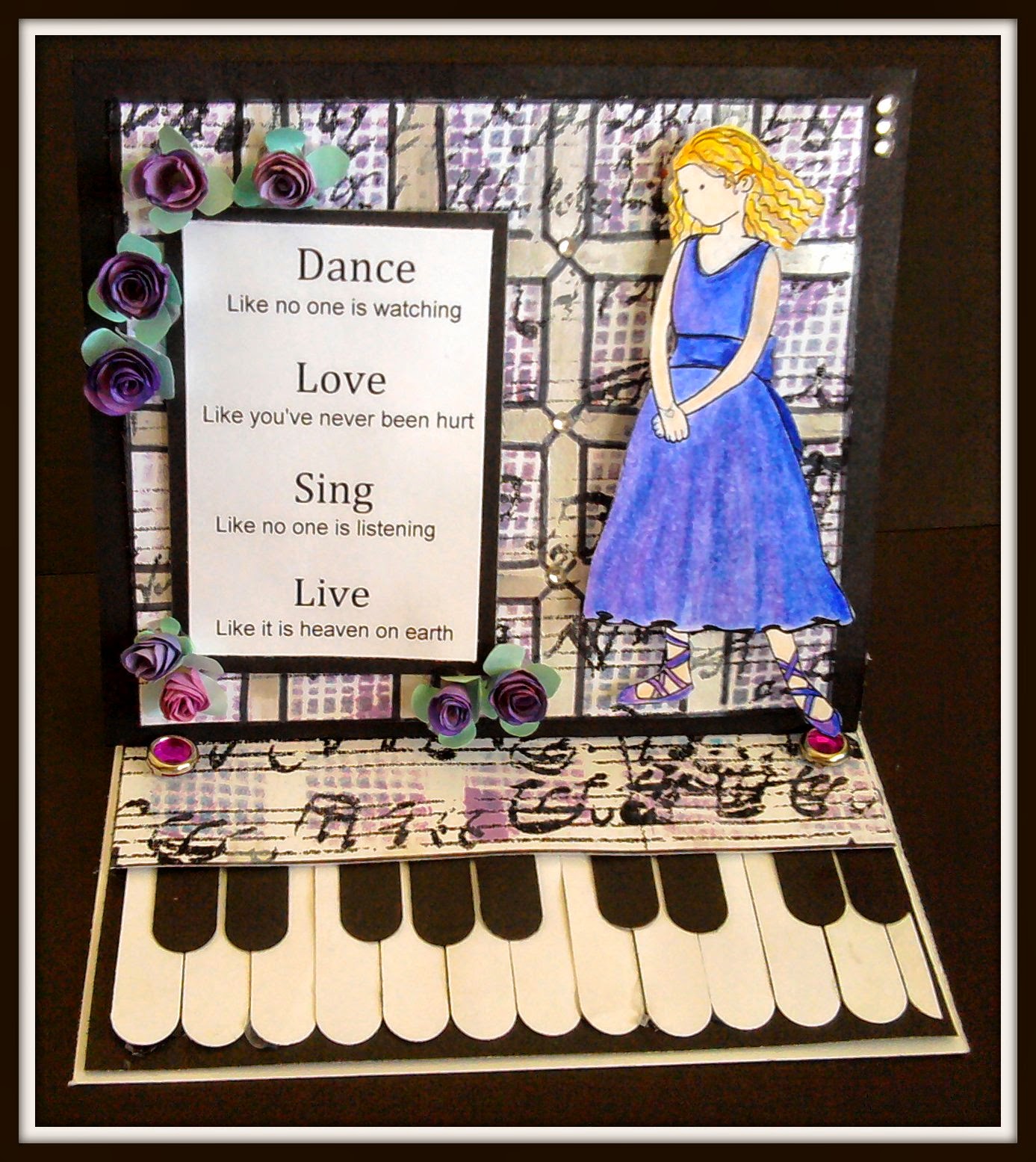 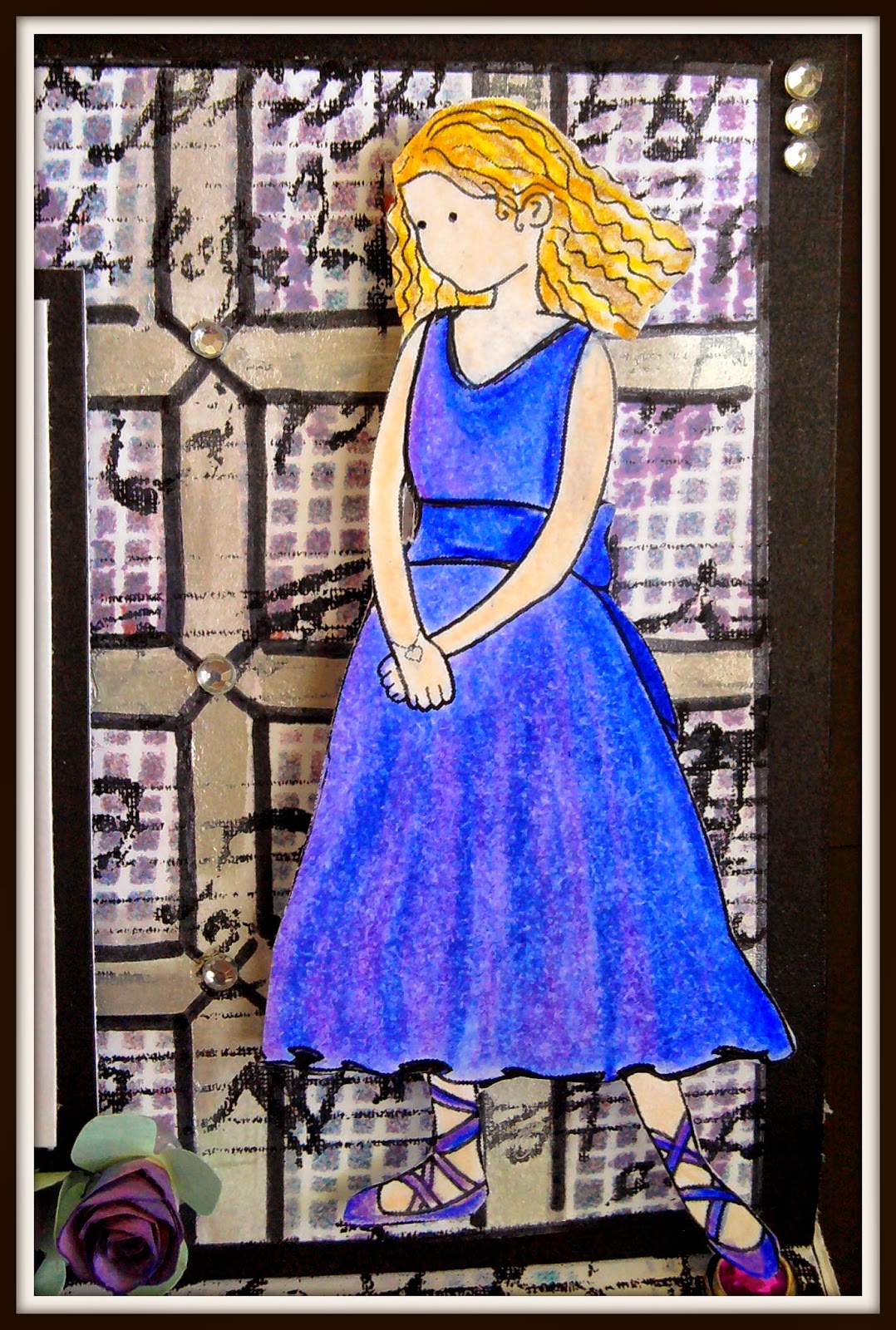 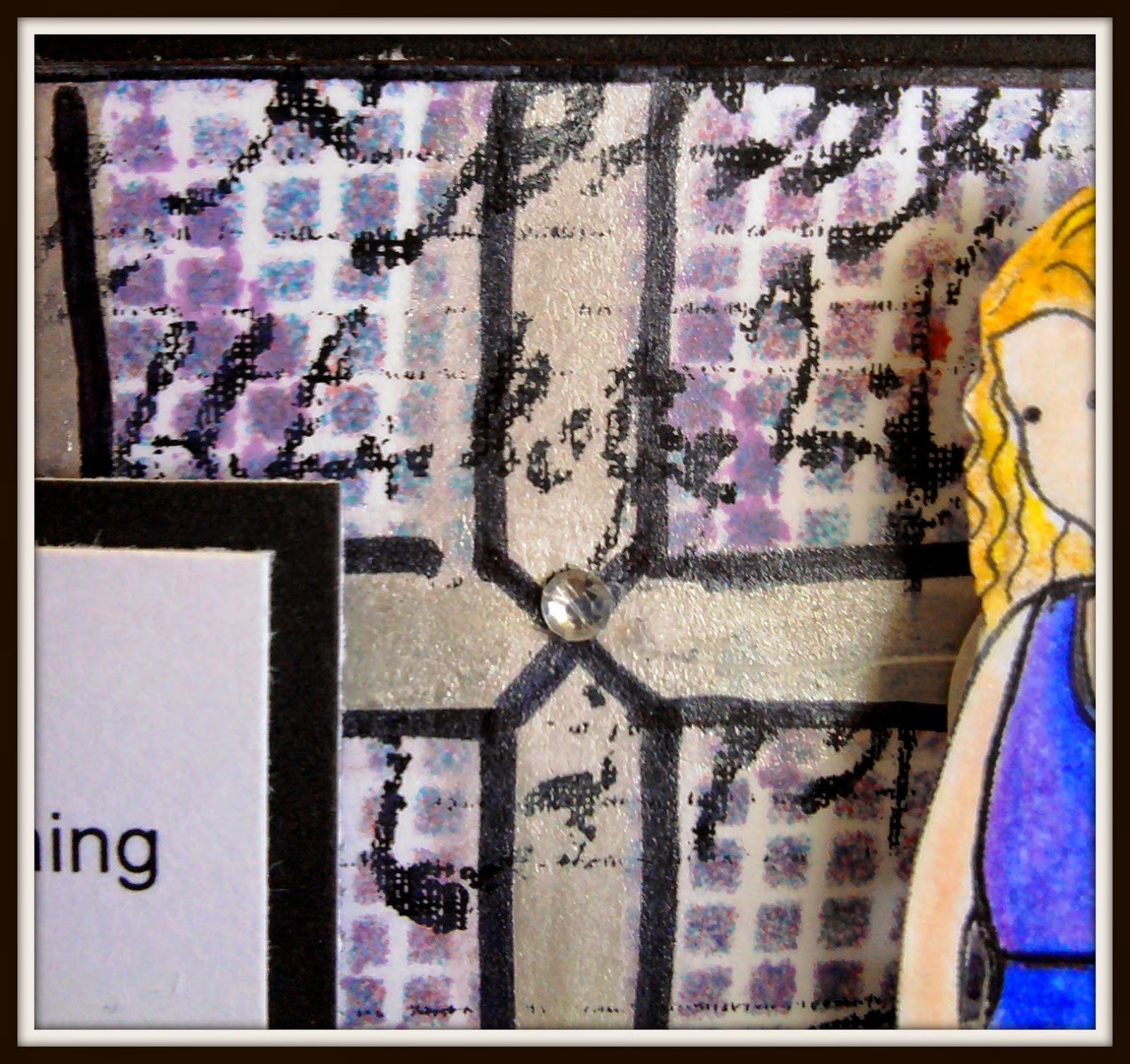 This card used the same stencil except with greens and blues. Instead of doing silver inka gold metallic rub on the grout, I used texture paste. I added rhinestones, quilled roses and stamped butterflies. 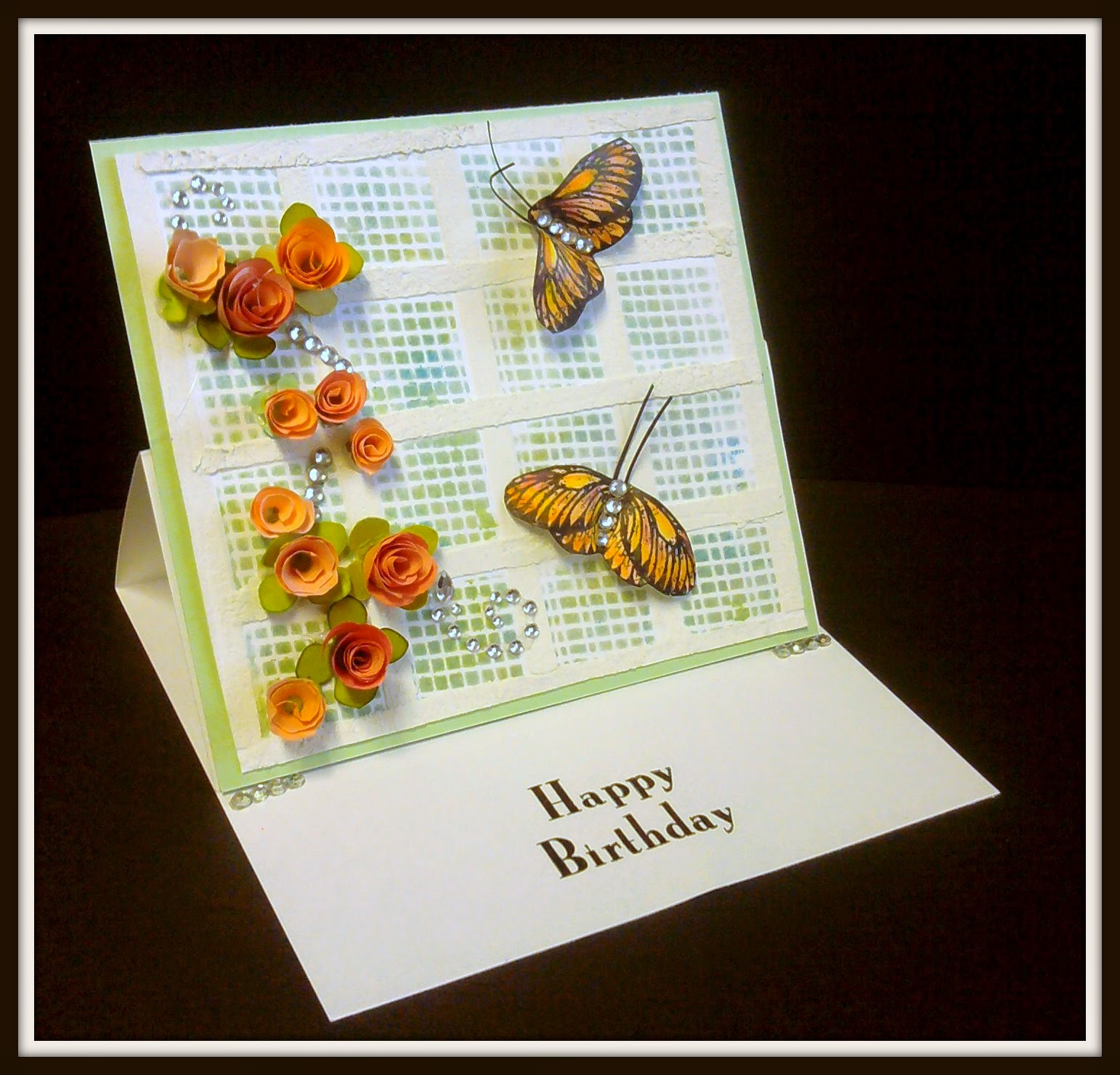 Just when I thought I was done... 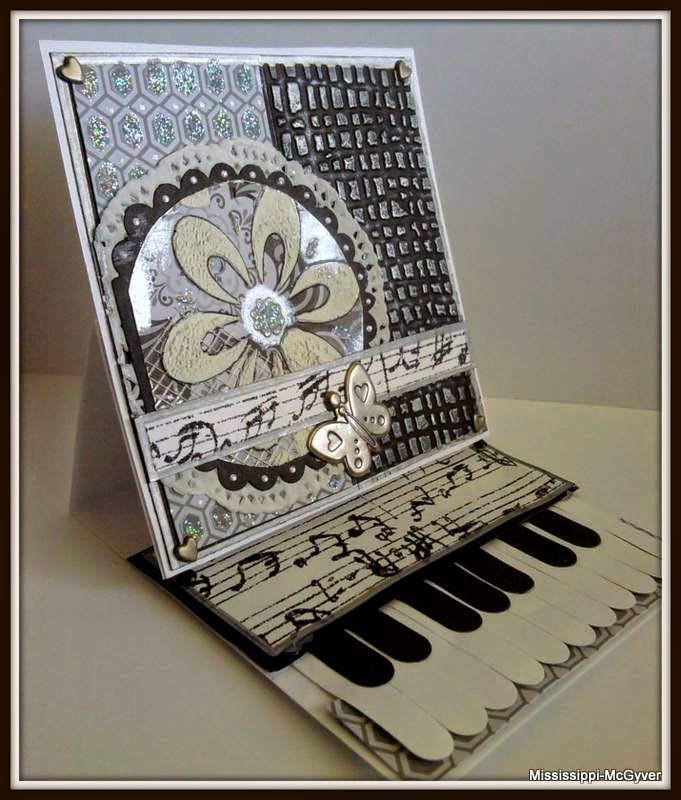 Just when I thought I was done, I found out I wasn't. I had shared my card on SCS. One of my friends commented that it was a nice card but that she missed my pianos. That was when I knew I wasn't done. I took my card apart and made it an easel card. I added the same dp and sheet music and a piano keyboard to the base of the easel. Not only do I love it more, it was easier to photograph. You can see that the butterfly isn't gold.
Posted by MariLynn at 5:45 PM 2 comments:

For today's sketch challenge on Splitcoast Stampers, SC489  I decided to use up scraps off of my desk. Last week when I made texture paste, I took some dp and was just playing around with it. In this first photo you can see the texture paste.To make it stand out from the dp, I outlined it with a black ink pen. I also added silver inka gold metallic rub to the center of the flower.. I also added glitter to the center. There is drywall tape under the texture paste. I rubbed the silver inka gold over the background behind the flower. 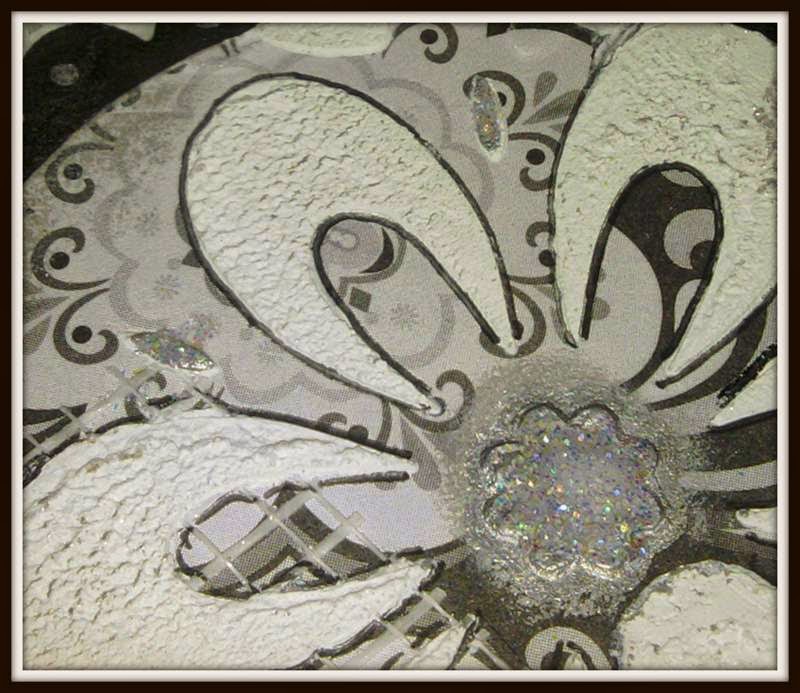 This photo shows the dp that I used on the base of my card. I wanted to add some interest, so I took a silver marker and put dots in the centers of the gray diamonds. I also decorated the hexagons. I took a white prisma colored pencil and drew on the left sides of the hexagons. I then added glamour dust glitter. 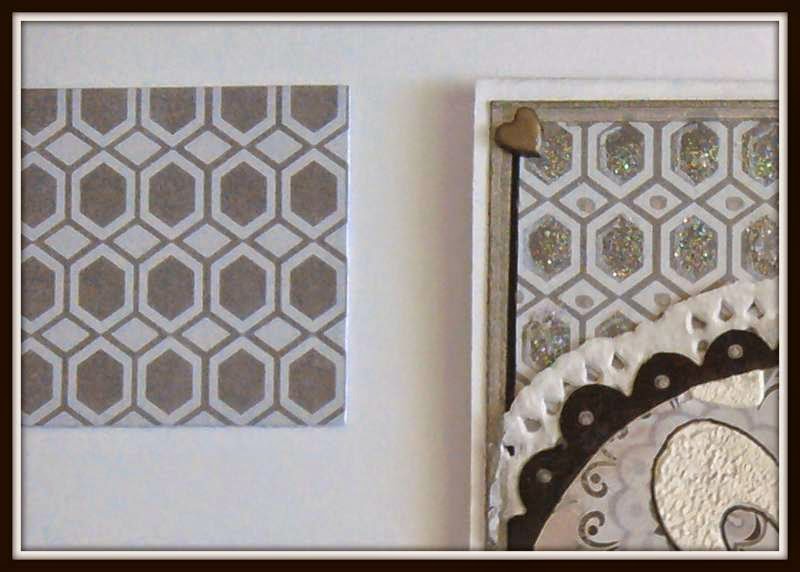 I used the silver marker to add dots to the black circle. 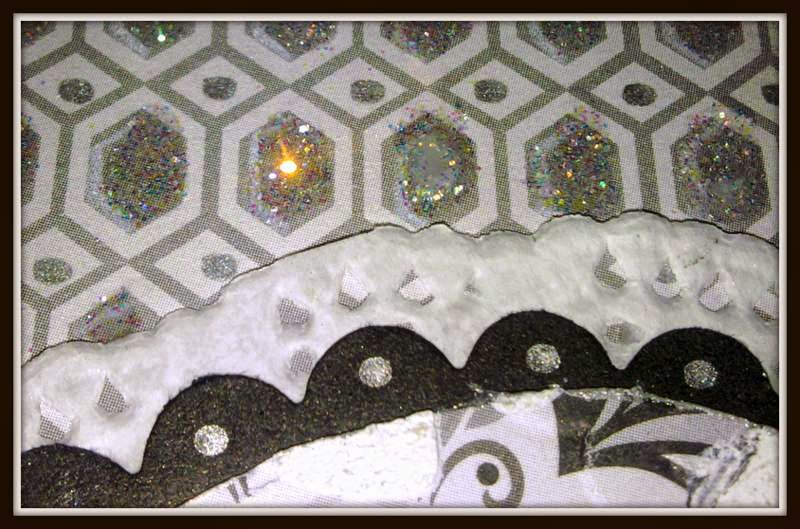 One side of the card was originally just black cardstock. I decided to dry emboss it and then rub silver inka gold metallic rub over the embossed areas. Before the card was put together I originally had this side to the left and the dp on the right but I decided to flip them when assembling the card. 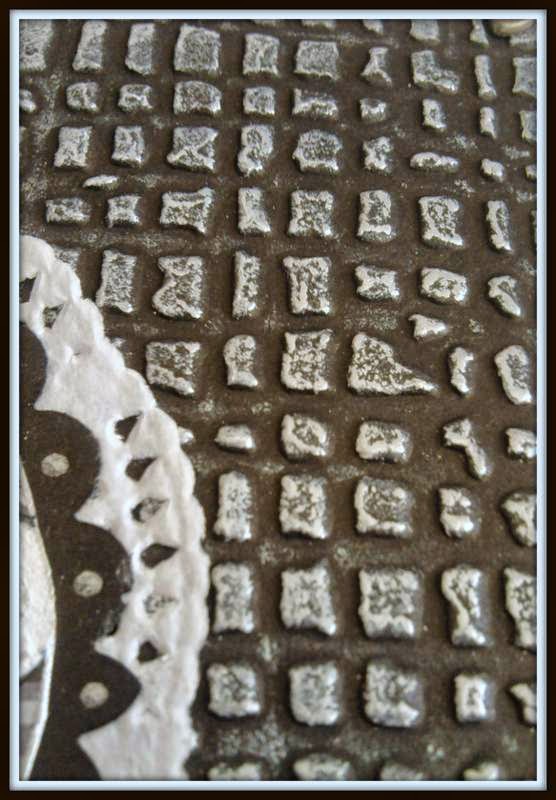 The little butterfly charm and the heart brads in the corners kinda look gold in the photo, but they are pewter. It was hard to photograph with all the shine and sparkle  on the rest of the card. 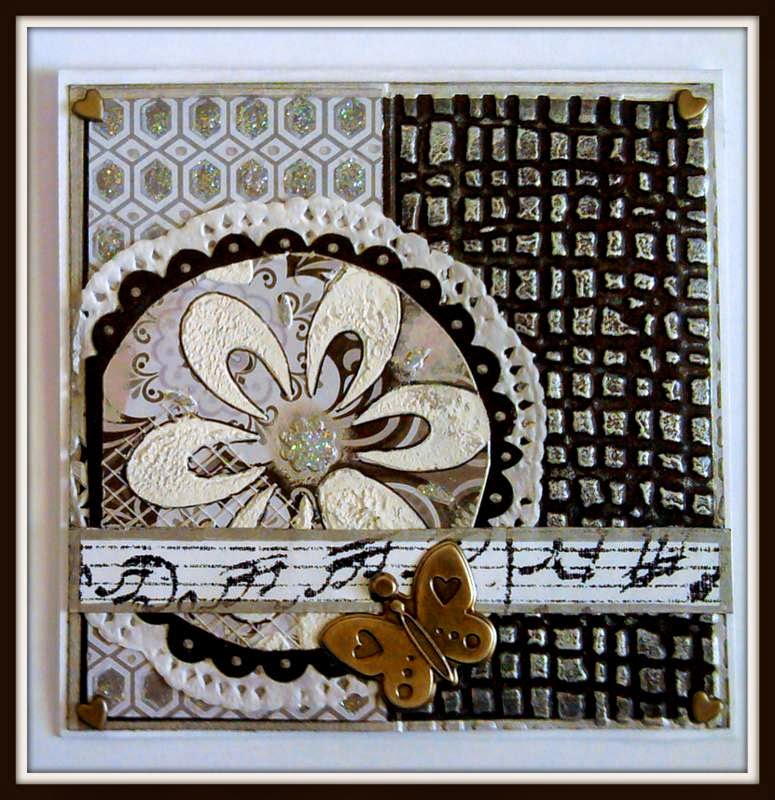 There are some cards that as I am making them I love them right away. Others take a lot of work for me to like them. This card was in the latter category. I had to walk away from it several times. I am at least persistent. One thing I have learned doing mixed media is you can always keep on adding things if you don't like how they look at first. This flower had a white center... covered it up with pink... covered that up with silver... covered that up with glitter (Liked it.) Stared with plain dp...covered it with colored pencils...covered that with glitter( Liked it.)  Started with black dp... covered it with dry embossing... covered it with silver inka gold (Liked it)  I had doily behind circle... covered up bottom with a black layer (liked it) If I had stopped at any of those points and taken a photo of this card, you may or may not have liked it but I know I wasn't happy with this card until I finished it,.
Posted by MariLynn at 3:07 PM 2 comments:

If you are looking for the Mark's Finest Papers Blog Hop  scroll down one post.

Mountain Plains Crafters has a new challenge with a chance to win a prize donated by Lawn Fawn.  The challenge is to make a card with a lawn and/or a fawn. For the lawn, it has to be more than just a couple of blades of grass. I choose to go for the fawn. I used Mark's Finest Papers set called JOYOUS SEASON.  I stamped the image with black stazon ink. I water colored the image. I made it into an easel style card. I have a lot of graduation cards to make between now and Sunday. I thought that this scripture was a good one to include on a graduation card. 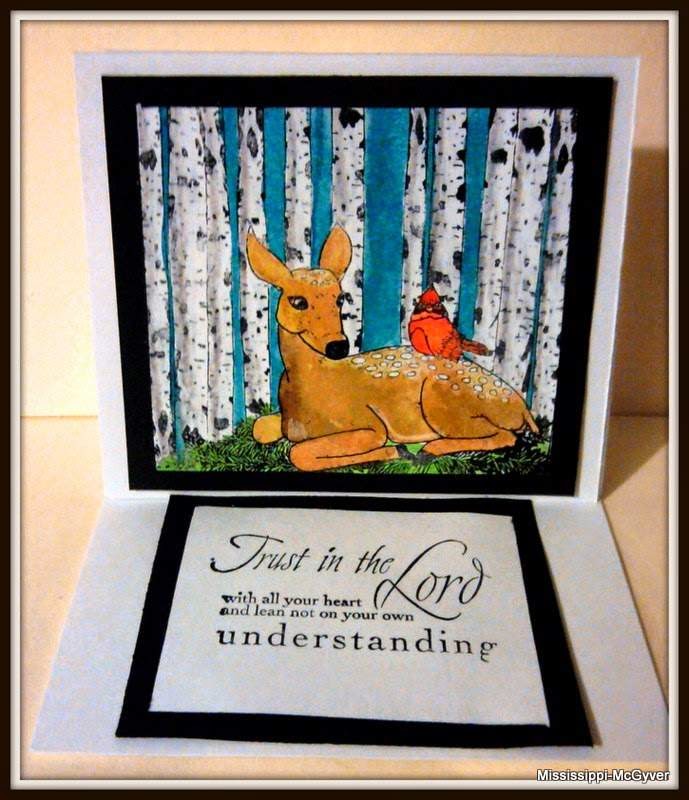 Welcome to the Marks Finest Papers, a Heinrich Company

May Blog Hop!
This month's New Stamp Set Releases are 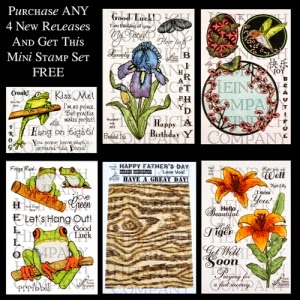 Please hop along with us! You have a chance to win one of the above stamp sets! Just comment on the following blogs (don't forget this one), each day for more chances to win! (You do NOT have to comment on all the blogs each day! The names are drawn randomly!) All six winners will be announced on
May 17, 2014 on the Mark's Finest Papers blog. You can go back and comment if you missed a day. (HINT: The more you comment, the more chances you have to win and comments on the MFP blog count twice!)
The deadline for
commenting is 10 PM EST on Friday May 16, 2014 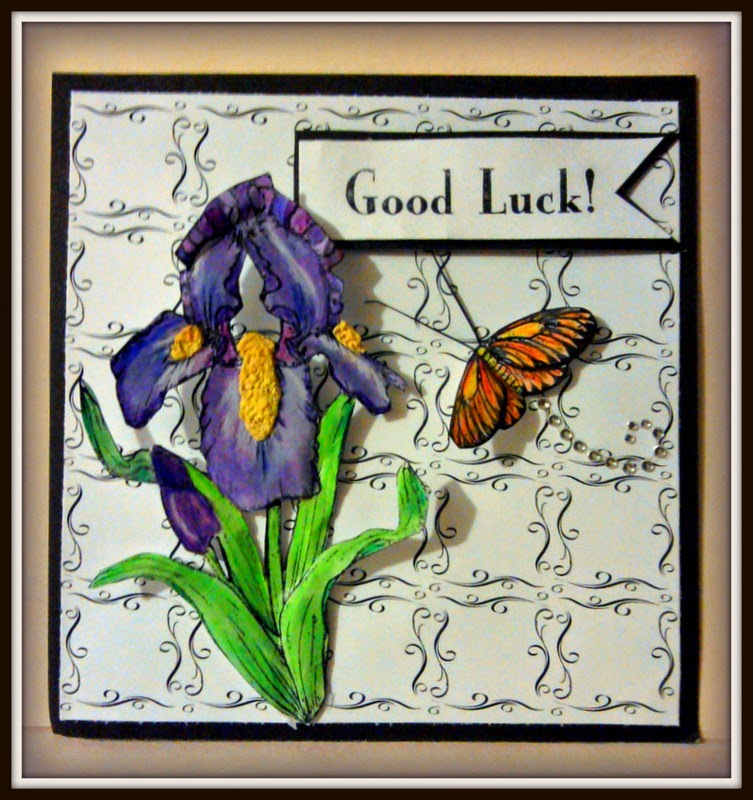 I stamped the iris with black stazon. I put a water colored base and colored over it with prisma colored pencils. I added some colored texture pasts. To make it look realistic, I took a paintbrush to rough up the paste. The butterfly is dimensional. I shaped it over my finger. I added bling as a trail. I have about 12 cards to make for graduates for this Sunday.

Come on back tomorrow for more creativity.
Posted by MariLynn at 12:00 AM 17 comments:

Welcome to the Marks Finest Papers, a Heinrich Company

May Blog Hop!
This month's New Stamp Set Releases are

Please hop along with us! You have a chance to win one of the above stamp sets! Just comment on the following blogs (don't forget this one), each day for more chances to win! (You do NOT have to comment on all the blogs each day! The names are drawn randomly!) All six winners will be announced on
May 17, 2014 on the Mark's Finest Papers blog. You can go back and comment if you missed a day. (HINT: The more you comment, the more chances you have to win and comments on the MFP blog count twice!)
The deadline for
commenting is 10 PM EST on Friday May 16, 2014


You may be wondering why my card has a frog wearing a graduation cap. When I first saw the stamps in this set, it made me think of my son who graduates from high school this coming Sunday. When he was a little boy he loved tree frogs. He had a stuffed tree frog that he carried everywhere. I had a book about tree frogs that he always wanted me to read to him when it was bed time. So I decided to use this frog on his graduation card. I had some fringe that I cut to make the tassel. I stamped the 2014 from the set and cut it into a circle. I stamped the word FROG from  the Kiss me set. I am going to write "Fully Rely On God" on the inside as encouragement as my little boy goes on to the next stage in life. 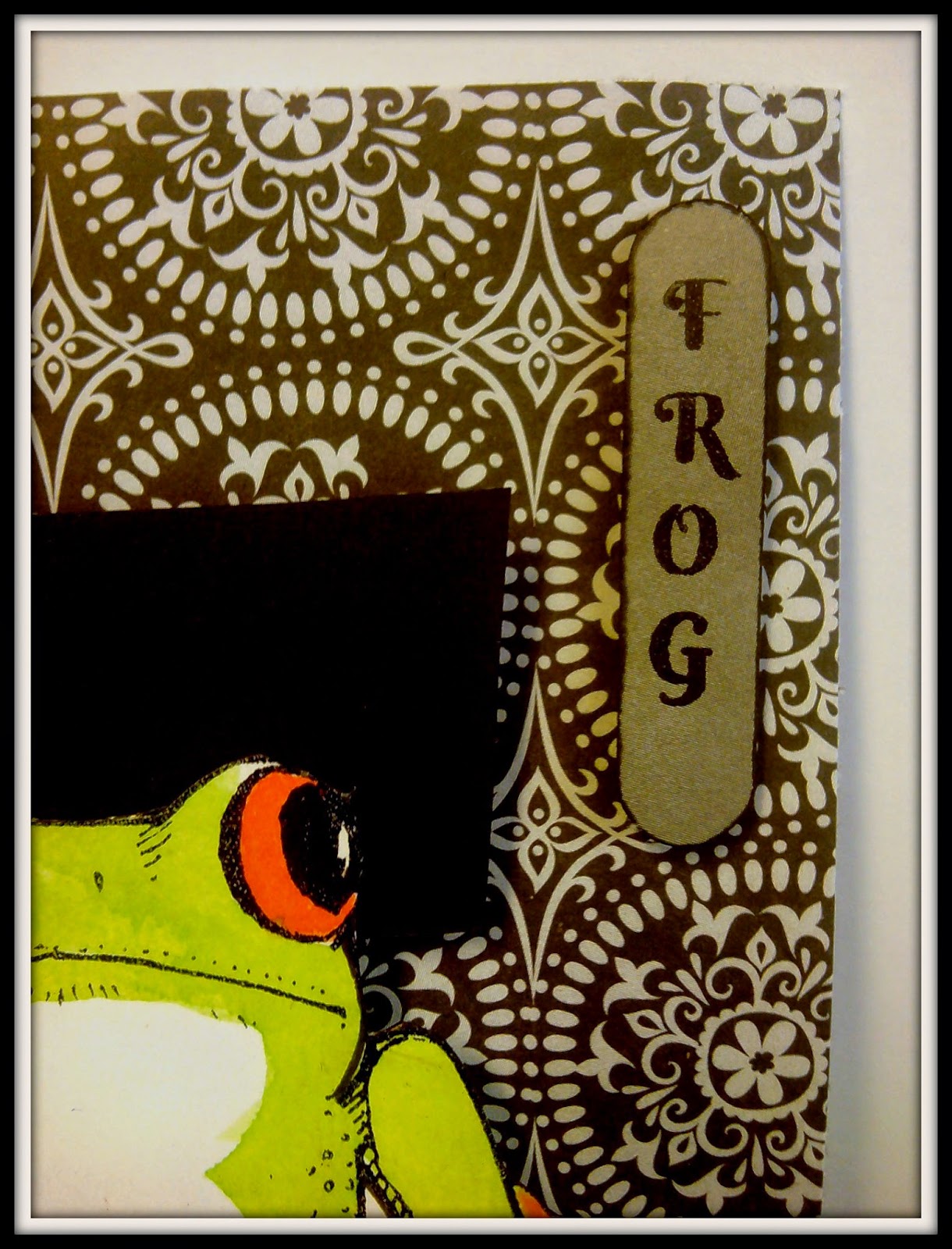 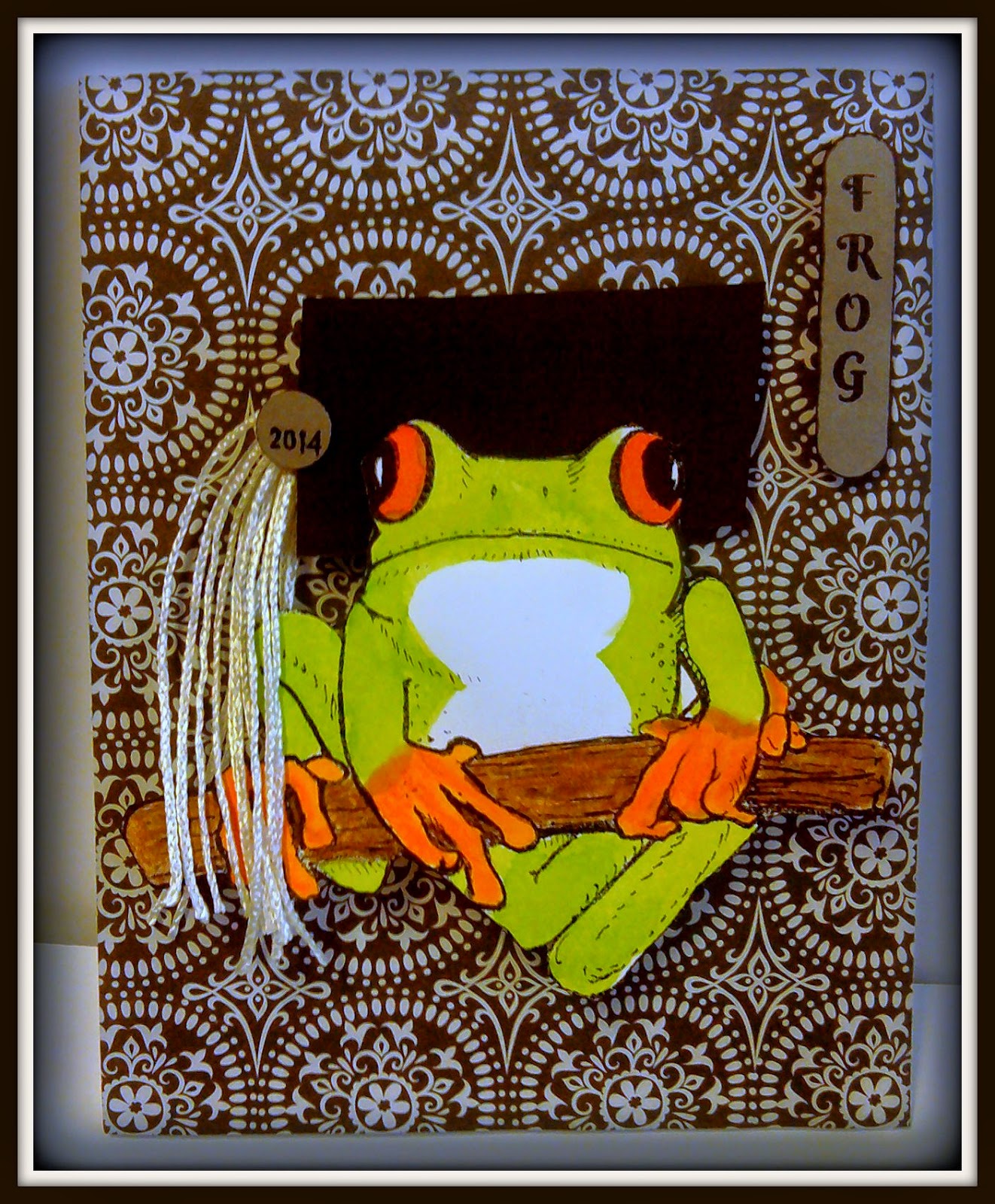 For my Tiger Lily card, I

stamped the lily and water colored and then used prisma colored pencils on it. If you look closely at the center of the lily you will see colored texture paste. It is the same texture paste that is in the corners, but just with some extra color. I used the plywood stamp set for the background. 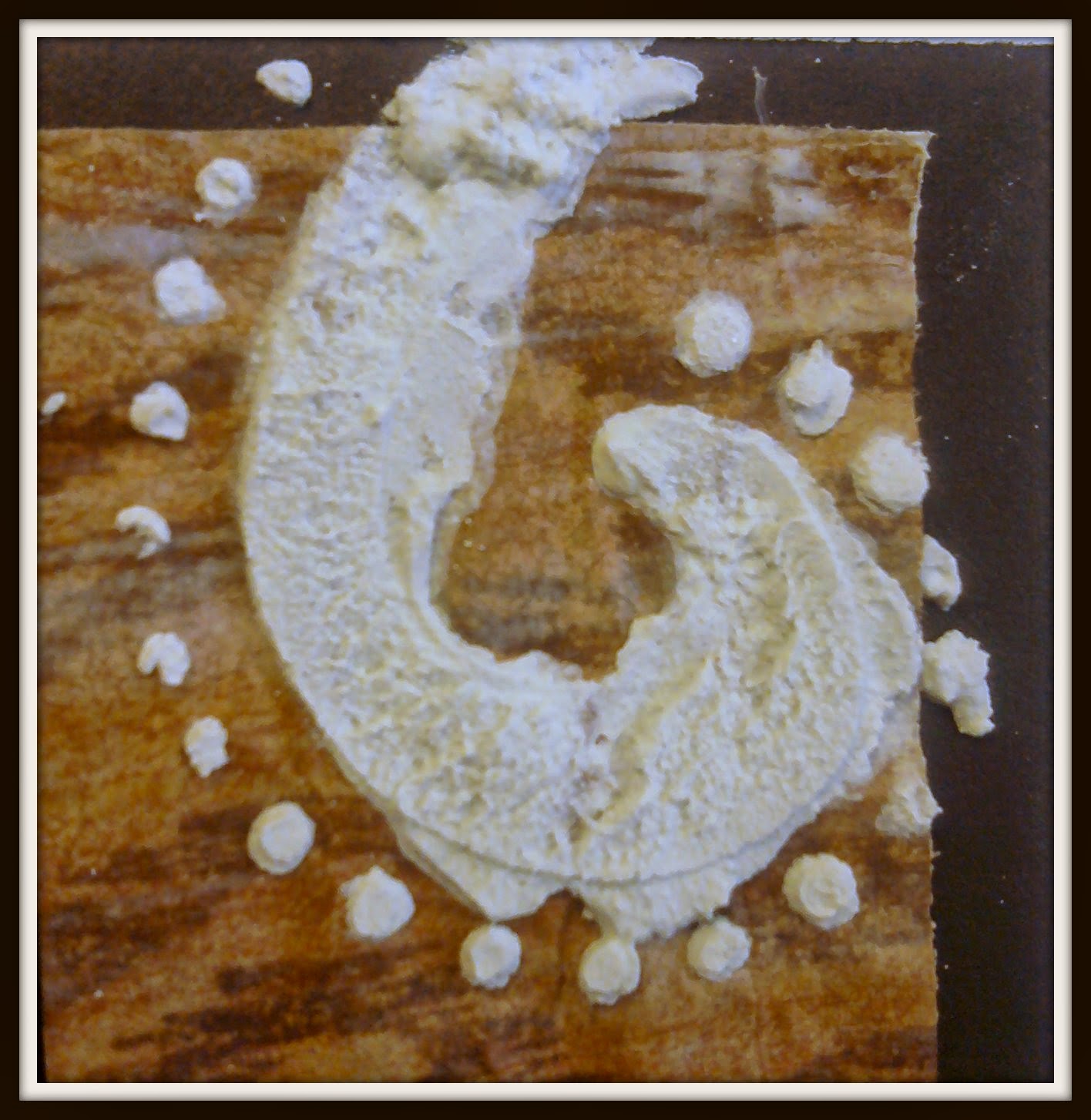 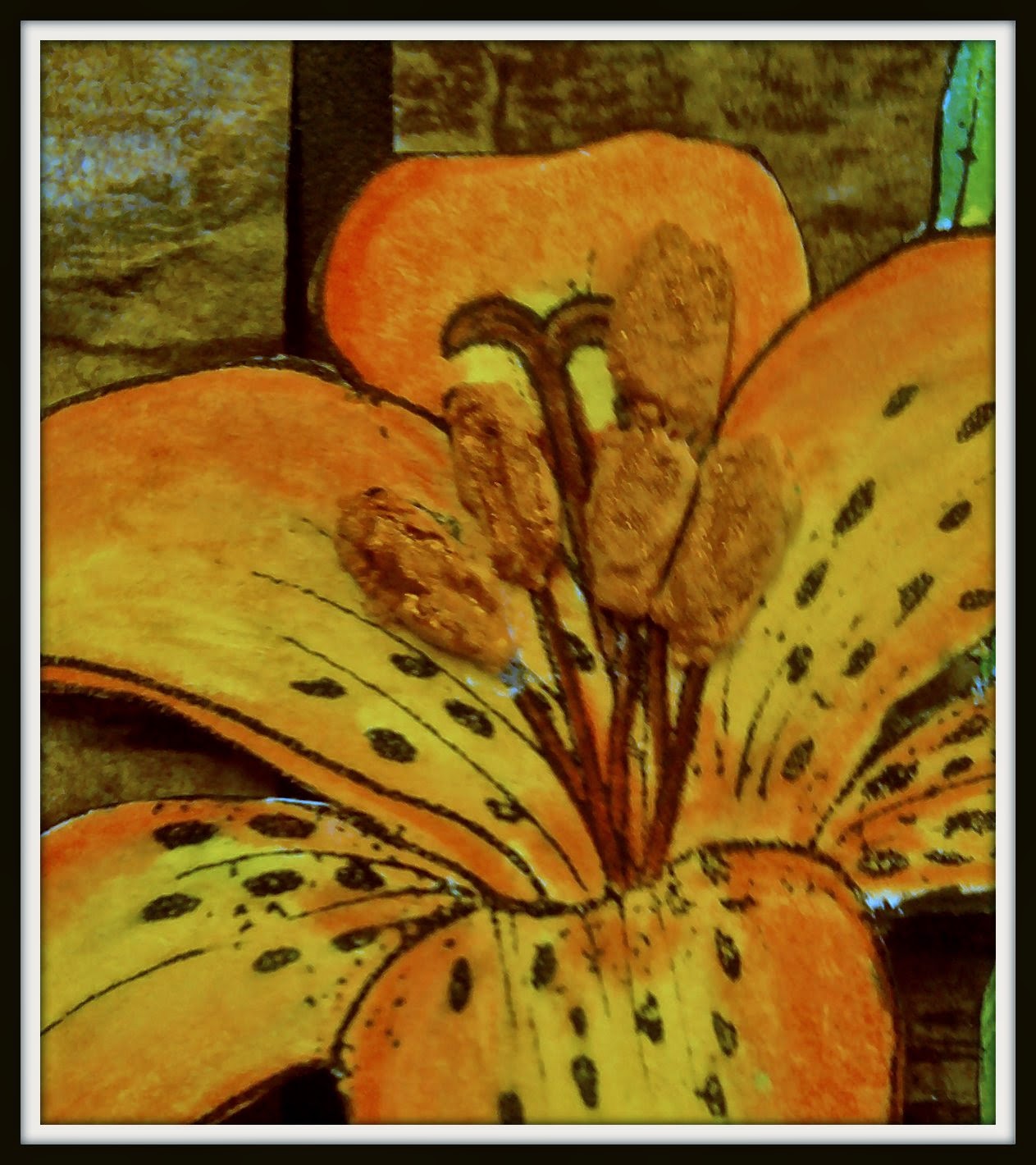 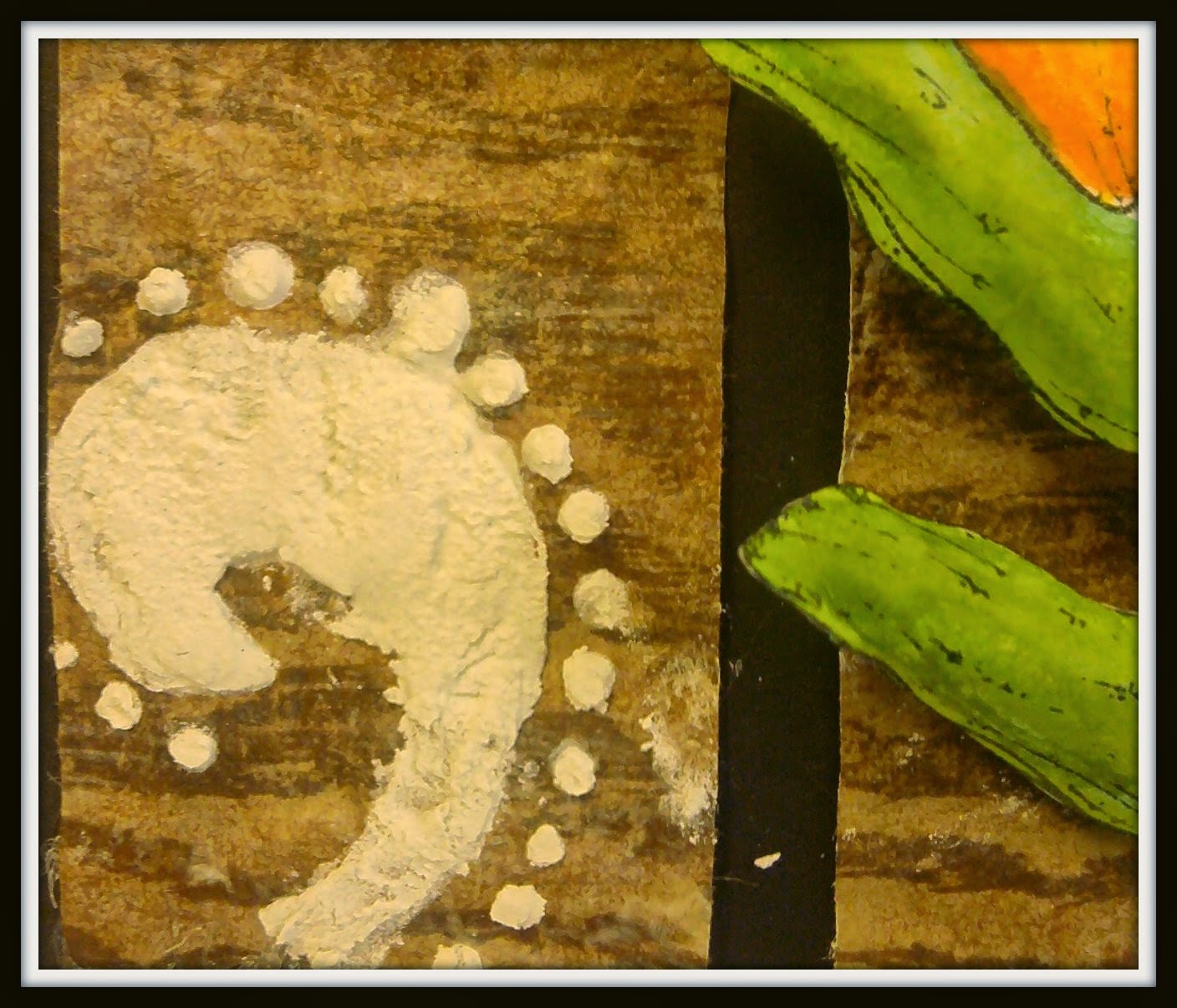 To make the flower stand out I used hot glue and punched circles to make "sandwiches" to add dimension. If I had just put hot glue on the back it would be hard to keep it from running out too much and it wouldn't have the same depth. 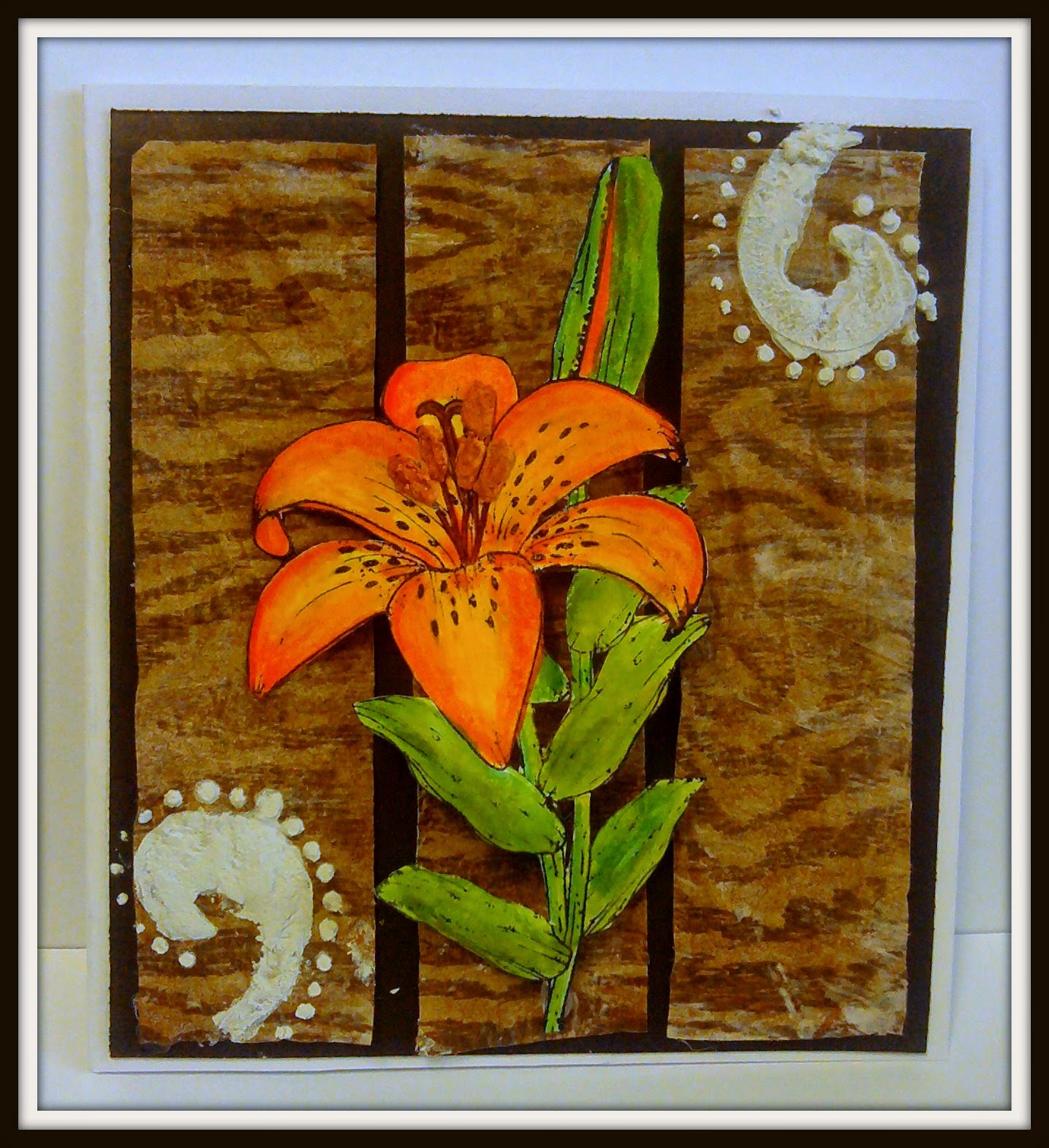 Come on back tomorrow for more creativity.
Posted by MariLynn at 12:00 AM 28 comments: