I made a waterfall card with little water colored pumpkins. What I have learned with practice is how to layer the paint to get texture. I have a lot still left to learn but I am excited to share how my painting is at this time. I hope you enjoy the video.
The sentiment on the waterfall card is from STAMPlorations Holiday Expressions- Thankful for Autumn. I believe it may be a retired set. But there are lot of other wonderful stamp sets at STAMPlorations.

You can use my discount code to get 20% off your order with STAMPlorations.
Hope you have a blessed day.
Posted by MariLynn at 11:56 PM 1 comment:

Time for another Coffee Lover's Blog Hop. If you are looking for a great source for coffee crafting supplies check out STAMPlorations. I have used many of their products to make my projects today.
My first two cards are fancy fold cards. I learned how to make them from Linda Heller HERE.
I used STAMPlorations  Zen Coffee Cup Layering Die 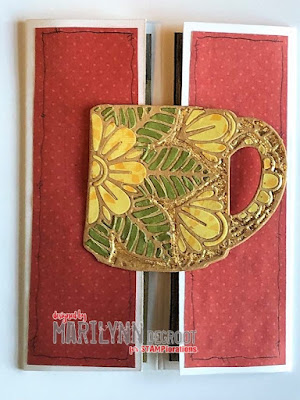 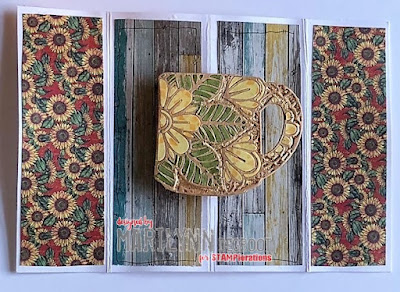 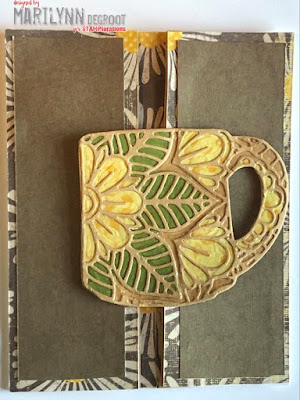 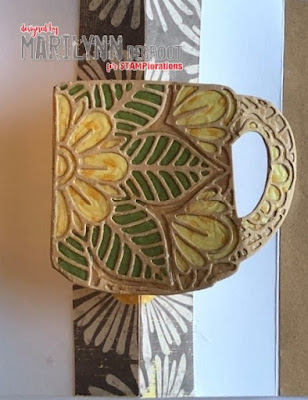 My next 2 projects aren't cards but little coffee tag albums.
For the first coffee tag album I  used the same die that I did for the cards above,  Zen Coffee Cup Layering Die
but only used the simple base to cut out my cups.
I die cut 8 cups of different designer papers. I also cut a piece of white cardstock. 2"x10". I scored and folded the piece of white cardstock every 2 1/2". I then cut little notches on either side of the folds. 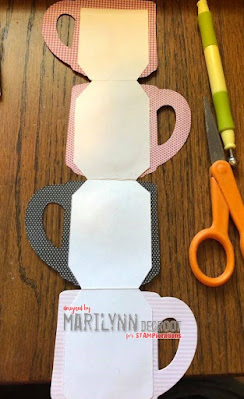 After I glued the cups down I decorated them. 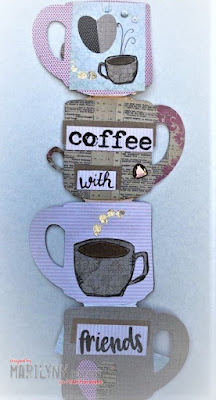 For this cup I used the die cut part that was left over from the handles of the cups to piece together to make a little heart. I paper pieced the cup from. Sketchy Coffee Cups. I added some little sequins and I added gilding flakes using Aleene's tacky glue and Bubble Dance Stencil 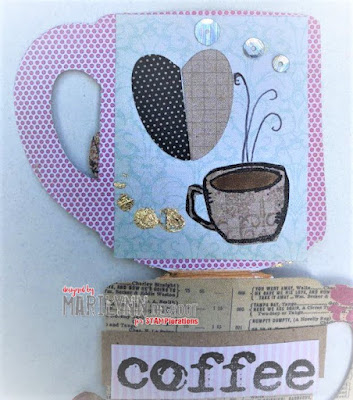 This cup I decorated with the word "coffee" from And Coffee. I wanted the word "with" so I hand drew that one. I embellished with a little triangle shaped rhinestone. 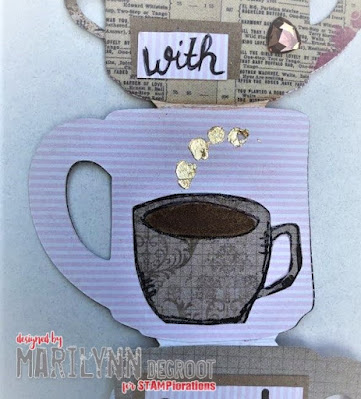 This cup I decorated with the word "friends" from And Coffee. I added another heart made from the left over handle piece cut by the die. 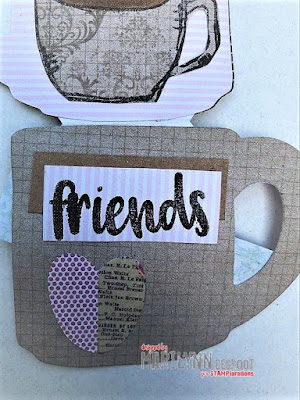 The second side of the cup album.

This cup was decorated with paper pieced cups from Sketchy Coffee Cups, another die cut scrap heart and gilding flakes added to the top and bottom of the cup. 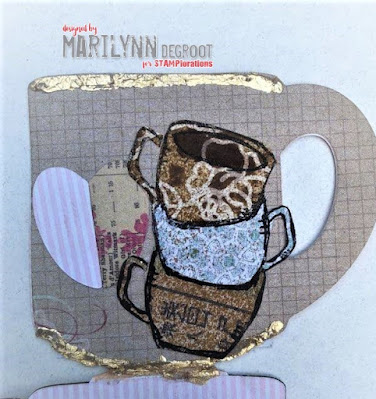 This cup was decorated with paper pieced cup from All you need is Coffee. Then sentiment is also from that stamp set. I also stamped the little heart from the Sketchy Coffee Cups set, on the cup 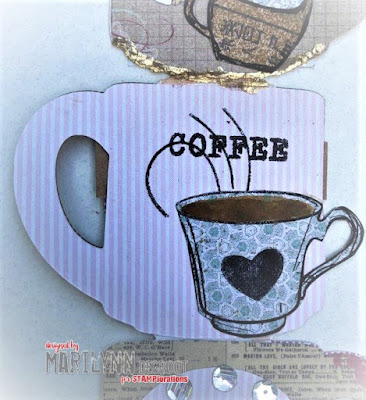 For this cup I cut a circle out and stamped the sentiment from All you need is Coffee. I added 12 little sequins and a little heart shaped rhinestone. 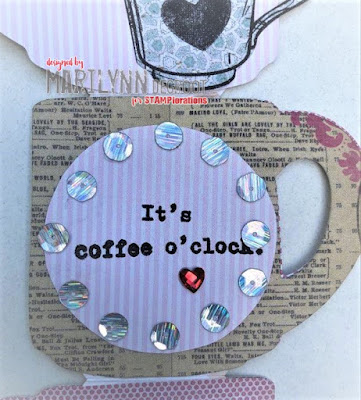 The last cup I decorated with the Coffee word die. It was a little wider than the cup so I had to tilt it and add a piece of cardstock under it to give it support and something to glue to. 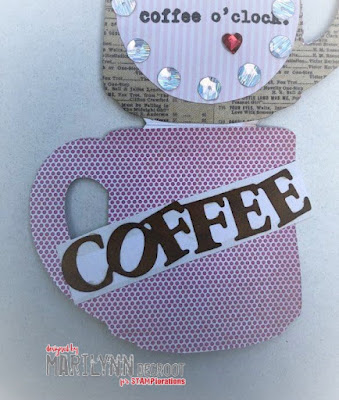 With the coffee cup album closed up I made a "belly band" with another die cut cup and a piece of cardstock. This is how it looked closed. 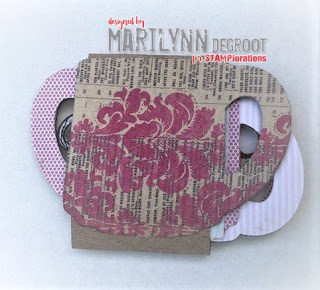 My last project for this hop is a little tag album. I cut 10 tags using the tag die from Tag O'Coffee.
The cardstock mechanism was a strip of cardstock 3"x10". I scored that every 2 inches and accordion folded it. I sandwiched this mechanism in between the tags. Making it have 5 tags connected and 5 on the backside.  This is how the tag album looked folded up. 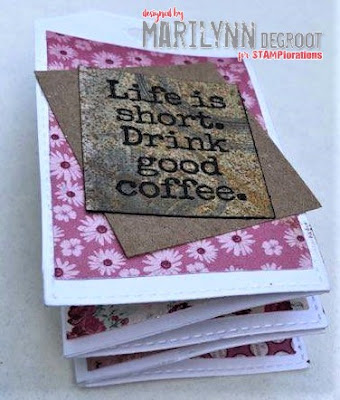 Here it is opened up showing the first 5 tags.
The first tag has paper piece cups from Sweet Kindness 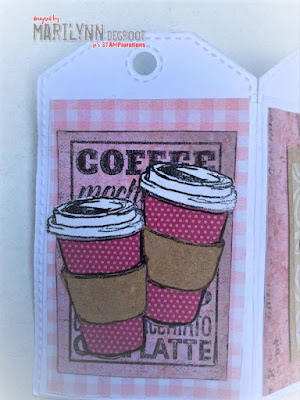 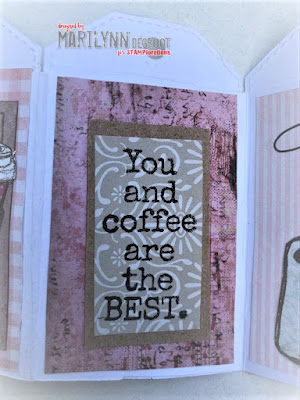 This tag was decorated with a paper piece cup from Sketchy Coffee Cups. I had seen a flourish on a piece of designer paper and I thought it would make a really neat steam pattern. So I sketched freehand a similar flourish for my coffee cup. 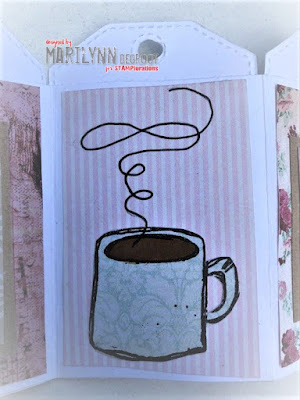 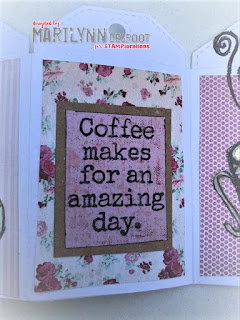 Another paper pieced cup using Sketchy Coffee Cups. I also stamped the little heart. I decided I wanted some bling so I used some glue and traced a design on the cup and on the heart with glue and added gilding flakes. 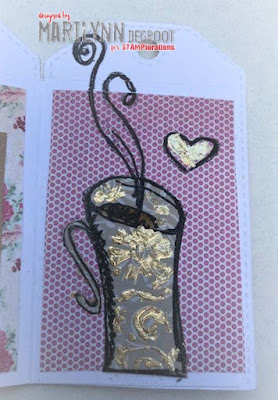 The other side of the tag album. 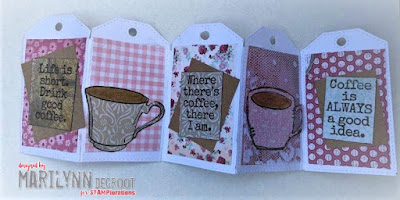 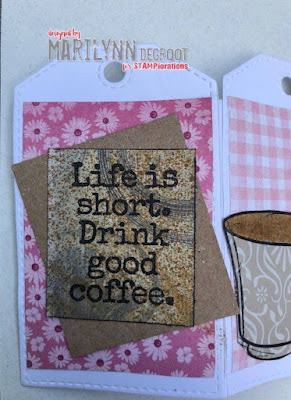 This tag has a paper pieced cup using All you need is Coffee. 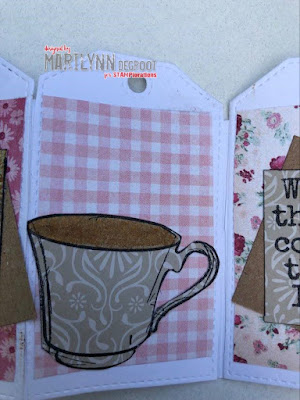 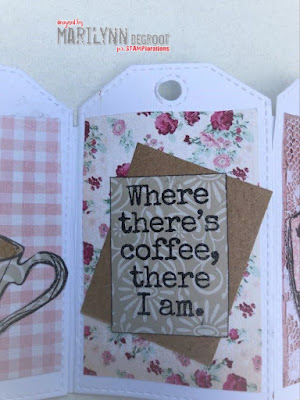 Another paper piece cup using Sketchy Coffee Cups. To add a little bit of texture I added a layer of lace underneath the cup. 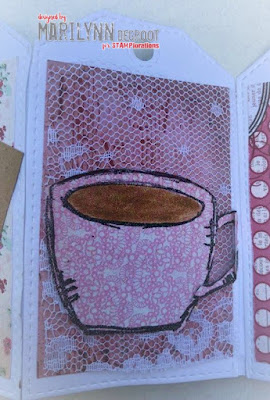 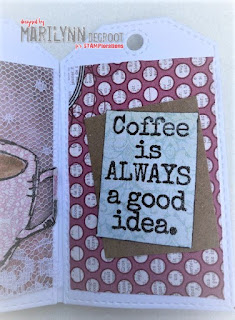 These are the STAMPlorations products that I used. If you like what you saw and want to add them to your crafty stash, you can use my discount code to get 20% off your order.  Hope you were inspired. Have a blessed Coffee Day.

All you need is Coffee.