Yesterday, I went back and looked at a card I made Sept 22, 2010.
That is this card here with the blue base floral panels and pumpkins. It was a nice card, but I was thinking how I would redo it to make it look better. On my old card the paper was pretty, but the pumpkins didn't stand out from the paper. The sentiment was kinda hard to read on the paper as well. The blue background was nice but it didn't really add much too the card. It also felt a little "flat" there wasn't much texture. 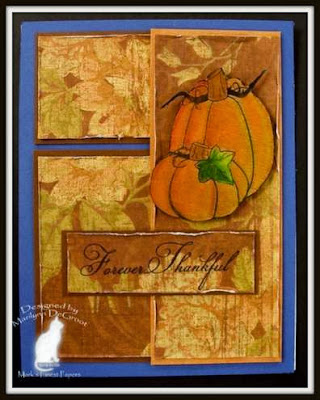 So for the changes to the card I started yesterday and finished today. I took the same pumpkin image and colored it in a very similar way. I tried to focus on shading, especially for the leaf. I replaced the panel behind the pumpkins with burlap. Not only does it make the pumpkins stand out more, it adds texture. The two horizontal panels, I used the same dp. The black matting really defines the panels. I added texture to those panels by embossing them. I also took gold acrylic paint and rubbed it over the raised letters. The dp that I used was 2 sided, so for the sentiment I used the back side. The plaid behind the sentiment makes it much easier to read, at least I think so. I added 3 little brads in the corner for interest and to kinda balance the design. On my first card I left the edges rough and distressed, but for this card I took a black marker and went around the edges of the dp with a black marker to give it a crisp look. The sewing also added some texture. I really like how this remake turned out. 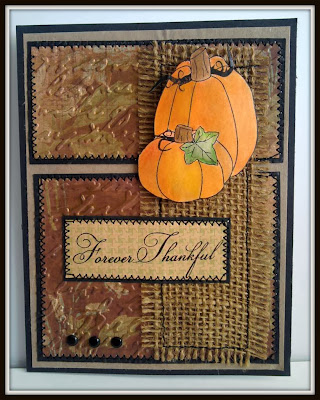