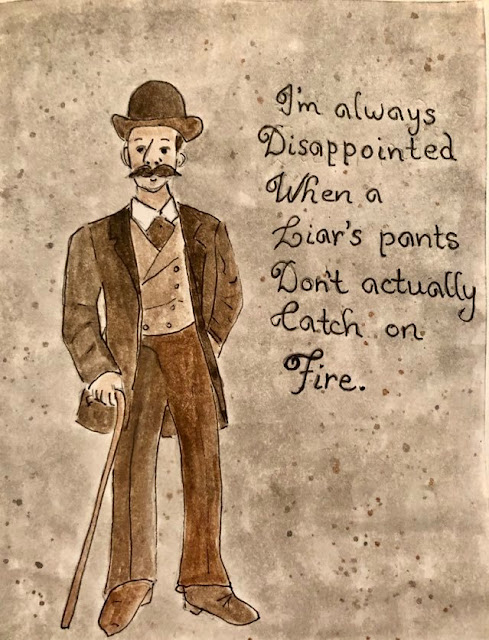 For the splitcoast stampers (scs) mix-ability challenge. I wanted to use this quote. I think it is hilarious. Thankful that I have practiced my lettering because it is getting easier and easier. I thought this sentiment would look great with a vintage image of a male in pants... But I didn't have a stamp of one so I drew him. I got on pinterest and searched victorian men. I drew him with pencil and then went over my pencil sketch with a pen that is color fast. Then I watercolored him using black and brown. I was almost afraid to do the background because I didn't want to mess him up after having spent so much time on him. But I also didn't want to leave the background white. It was too stark. So at the encouragement of my friend Lee Ann, I gave it a try. I used brown, gray and blue to make the background. Then I splattered it to break up the blank space some more.  Then I wrote the sentiment.  When I was done I showed my friend Lee Ann and I told her I was wondering what his name was. She said William and I had been thinking Harold. So I decided to let my computer help finish naming him. I googled William Harold and let google finish. There was a William Harold Smith who was an artist. Very "different' art. Not my style and I don't think he would have worn a hat and carried a cane. So I didn't think that was his last name.  So I tried again then got William Harold Lee. He was an architect. Interesting man but not "my man". So I tried again and got William Harold Neidlinger. He was a composer and singer. He studied music in England and in Paris and lived in Chicago for awhile. He started a school for handicapped children. He is known for writing the song The Birthday of a King. I really liked learning about him, so that is how Mr. William Harold Neidlinger ended up on my card.  I love going down dirt roads like that and learning new things. Kinda like when Paul Harvey would tell "the rest of the story."