I made this card with lots of different challenges in mind. The first challenge was the Mixability challenge... to have a hole on project to honor donut day.
It is also for Watercoloring bloghop and Coffeelover's bloghop.

I stamped the image several times. I watercolored the bottom image. The "holes"  on my card are my little sequins. They made me think of little colored donuts. Then I layered the cup image with glitter on the steam and then added another layer with the cracked glass cup. The glitter and cracked glass technique was a challenge that my friend Pam and I came up with. Both of us, within a couple of weeks of eachother had pyrex dishes explode on us. I overheated mine by putting having it on my stove and accidentally turning on the wrong burner. She had hers in her oven when it exploded. We were joking that our guardian angels were the ones who took the glass to spare us. So we decided to do cracked glass technique and glitter on a card. Accidentally my card also fit the second choice of the mixability challenge which was to take an oops and make it wonderful. I had originally wanted the cracked glass to be all of that rectangle but it didn't crack like I wanted it too, It was headed for the trash but then I decided to just cut out the cup. It actually turned out better that way, because I was able to add the glitter to the steam. 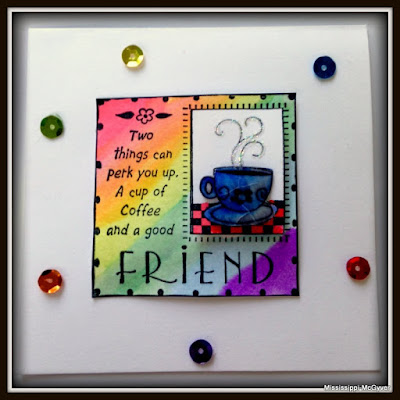 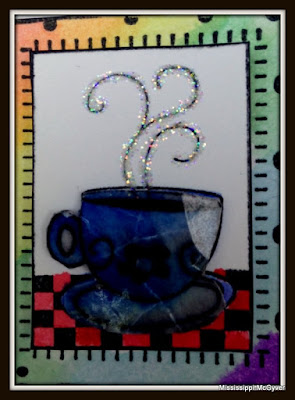