Hear the Angels as they are singing

Matthew 2:10-11 - "They rejoiced with exceedingly great joy. And when they had come into the house, they saw the young Child with Mary His mother, and fell down and worshipped Him. And... presented gifts to Him."

My stampin' Sister in Christ - Kris, challenged us to make a Christmas card. I have had this angel stamp for many years. As I as looking at the stamp and thinking about how I would make this card, I had a song going through my head. It is called "In the first light"  Here are the lyrics to that song.

"In The First Light"

As his mother held him closely it was hard to understand
That her baby, not yet speaking, was the word of God to man
He would tell them of his kingdom but their hearts would not believe
They would hate him and in anger they would nail him to a tree

But the sadness would be broken as the song of life arose
And the firstborn of creation would ascend and take his throne
He had left it to redeem us but before his life began
He knew he'd come back, not as a baby, but as the Lord of every man


I get chills EVERY time I hear the last verse.  For my card, I wanted to have a vintage look. I used cream colored dp. I took a paper doily and tea stained. it. I added pearls, ribbon, trim, cream colored tulle, and little peach colored roses. There are music notes from a Mark's Finest Papers set that will be released this week called JUST A NOTE. I added glue and glamour dust to the wings of the angel, and the rest of the angel was colored with prisma colored pencils. 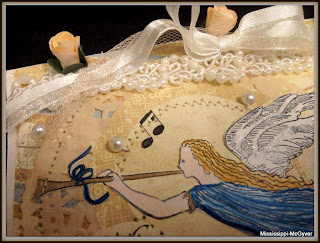 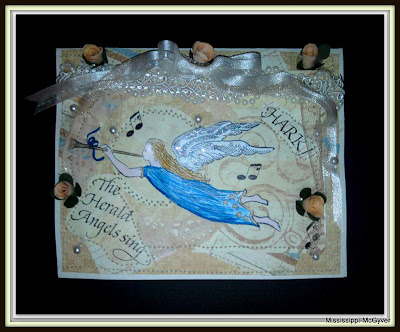 Here is a Video of GLAD singing In the First Light.