The hostess this week for Stampin' Sisters in Christ is my Stampin' sister Helen. She chose this verse to think about this week: 1 John 3:18 "Dear children, let's not merely say that we love each other, let us show the truth by our actions" NLT This last week my daughters and I watched a "Chick-Flick". We laughed at the predictability of the two main characters "falling" in love. I remember that "falling in love" feeling. It was nice while it lasted, but the problem with feelings is that they come and they go. The year my husband and I got married, my parents celebrated their 25th anniversary, my in-laws celebrated their 35th anniversary and my grandparents celebrated their 50th. We included in our reception a celebration of their examples of love. My husband got up and thanked them all for their examples of what love looks like. His parents had to deal with his mother being diagnosed with Multiple Sclerosis(MS). So many couples split up when there is a diagnosis of a serious disease, but his parents showed true love by working through the health issues. There was a time when my mother in law was completely bed ridden and my Father in law had to do more than his share of the work. For my in-laws love wasn't a feeling, it was a decision and their actions showed in how my Father in law took care of my mother in law. This year my in-laws celebrated their 56th anniversary. Last week my daughter was a bridesmaid in a wedding. I wish I could share with her friends the secret of a long marriage. This scripture sums up that secret. The need to "Not merely say that (they) love each other..." but let their actions speak for themselves.

This is Helen's Challenge : 1) image showing action OR 2) an image only on the front of your card (no sentiment on the front) OR 3) action card (make it move)

I went with the second part of her challenge to make a card with no sentiment on the front. 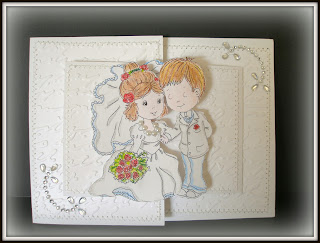 This week's sponsor is The Paper Shelter. I used one of their images in my card. This little wedding couple is so cute. I added extra dimension by layering the groom's head and adding dimension on the bride. The back part of her veil is the bottom layer. I made a joy fold card with white on white embossing. I added want2scrap bling on the corners and added pearls to the little bride's neck.

Check out what my Stampin’ Sisters in Christ have created to share with you.
Candace
Diane
Helen
Jerusha
Kris
Linda
Michelle
Miesje
Peggysue
Sandie
Posted by MariLynn at 2:00 AM